So the NZ Mid-War Grand Tournament is coming up next weekend and the final and furious phase of painting soviets is in full swing. It's a doubles tournament and I'll be attending with my brother Andrew. When I say 'doubles' I mean two players playing on the same team together on the same table against another pair, also playing on the same team. I say that because there seems to be some confusion between this and some other types of 'doubles' or 'teams' tournaments. Anyway, now that those confusions are cleared up, here's what I've been doing to get caught up on my half of the team's army. I apologize for the really crappy photos, but hey, I'm on vacation and I gotta use what I got, a 10-year old digital camera!


So, Andrew and I have been noodling up some lists and we finally settled on Soviets. This was probably because I told him we're playing Soviets, and as the older brother I got my way. ;)

We wanted to take two Soviet militia battalions backed by two Sthraf (penal) companies. But there was simply no way we were going to drum up nearly 150 infantry teams between the two of us in addition to all of the support material. So we decided to go with a Strelkovy (me) and Mixed Tankovy (Andrew) combo. 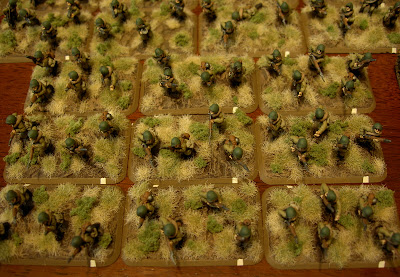 I've got a lot of stuff finished and I'm particularly happy to be done with the bulk of my infantry. I've still got all of the mortars to do. Nine medium and four heavy mortars for the list form what I like to call the Soviet Demigod of War. Nine mortars, even if they are medium, gives me a double-wide template and re-roll misses (key for conscript artillery).

Anyway, getting close. Andrew and I are working on the last bits now. I'm looking forward to the tournament and hopefully the Brothers Haught will be a force to contend with during the upcoming weekend!