A Bit of FoW Nostalgia 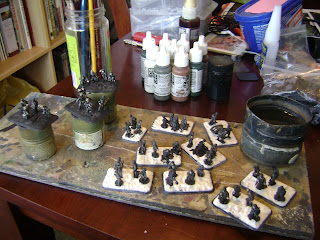 I've been busy painting up my Early War German army for my Blitzing Blitzkrieg project, a Liechte (Light) Panzerkompanie. I've got most of the tanks done, its just down to the infantry, motorcycles and guns. I figured that I would use my old pioneers for the infantry since the uniforms were the same. Or so I thought... When I pulled them out to have a look I noticed they have a lot of Mid-war characteristics, chief among them the splinter helmet covers. Oh well!

But it did get me in the mood to finishing the pioneers. I bought them in 2005 or 2006, I cant remember. They were my first German army. Up to then I had only played British armor and infantry. I remember picking up a pioneer blister at the store thinking that they looked cool with all of their shovels, grenades, and explosives. Plus, I'll admit that I think the Goliath is pimp. I really liked (and still do) forces that were like little miniature armies whose combat and weapons platoons formed a self-sufficient unit. So I bought them.

I quickly realized that I was short on points (1500 being the standard back then!) so I bought a pair of Tiger I E tanks. And that was it,... until I bought some StuG F/8s and some Bogward BIV demolition carriers. And then some Stuka zu Fuss... As you can probably tell I like the idea of blowing shit up in a big way.

Here are some interesting youtube videos. I dare you to watch these and not want to have each of these in your army! 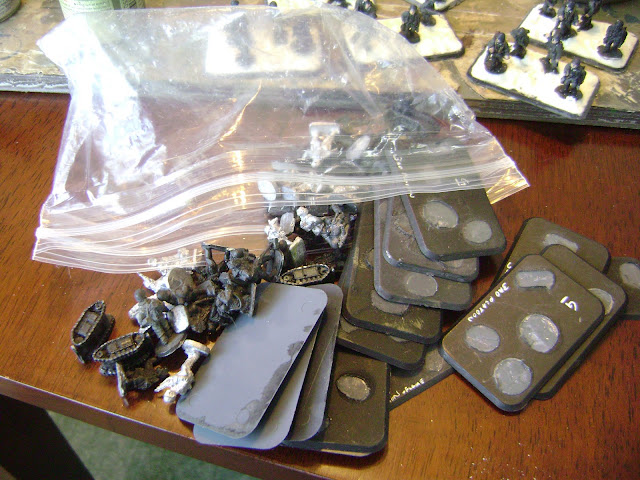 Anyway, when I made the move to NZ I had to collapse my massive FoW collection into a smaller space. So I clipped all the figures off their bases and chucked them into a ziplock for a later date. The figures were never fully painted and not at all based. That is until yesterday when I pulled them out for the Blitzkrieg project. 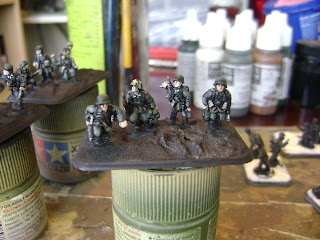 So I rebased the first platoon and reconfigured it for the revised MW organisation (only one Goliath!) and started painting it up again, touching up chips and replacing broken figures. I also grabbed the old StuG F/8s and Tigers to have another crack at.

I've been having a blast revisiting my old lists. Which got me thinking, do you remember your first FoW lists? Do you still have the figures? Its fun to visit those original lists and figures!
Labels: Flames Of War Germans Late War Mid War