Back to North Africa!

It seems like ages ago I was putting together my first Flames of War army, a British Motor Company from old Desert Rats book. It was also my first miniature game. I was (and to an extent still am) a card-flopper, playing the excellent games by Decipher Games (Star Trek, Star Wars, and Lord of the Rings).

Anyway, now that Hellfire and Back is out on the shelves, I've been yearning to get back into the desert and play my British once again. I was pretty hooked on the Jock Column, the Early War equivalent of my Motor Company, until I spied the RAF Armoured Car Squadron. I am a huge fan of the Rolls-Royce armoured car, so I think I'll try that force.

I like how the force borrows a lot from the Jock Column, so in a way I'll still be fielding the same troops that I was used to, only with Rolls supporting them rather than Crusader light tanks.

With such a large points value, this unit has plenty of options and room to expand. I'm pretty sure that none of this stuff fought together, specifically the Rolls-Royce cars and the 25 pdrs, or maybe even the 2pdr portee,... but for this force I'd like to use what I've got painted. I'm not a huge fan of painting with Dark Sand,... I reckon its a bitch of a paint color to use as it doesn't cover well, so the less of that I have to use, the better. Also, with all the painting projects on the table, I need something fast and essentially all I'll need for this force are the armored cars.

I'm also more than a little interested in the Iraq campaign, and would eventually like to steer this company toward building the No 1 Squadron (RAF) that fought there (obviously the force will be leaving all of its  fancy kit, like the 25pdrs and 2pdrs, in Egypt). So, I guess I'll be heading back to the desert! 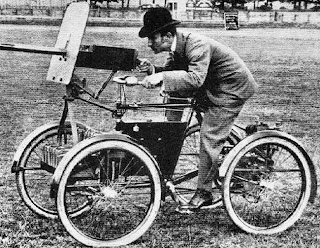 An interesting site with a history of British armored cars, starting with a motorized armored quadricycle!
Here...