An interesting post in the Flames Of War forum has prompted me to write this article on the crazy world of LeClerc's trucks during the Sahara campaign and how to field them in Flames Of War.

When I was writing Burning Empires, the most difficult of the raiding forces for me to get a handle on was the Free French in Chad. A lot of this has to do with the language barrier, but really it comes down to available reference material. The Italians and British kept excellent records of the fight in the Sahara, but the French seem to have been more concerned with victory than keeping inventory, fair enough too. But the nature of the desert campaign was that of expedience and thrift, so getting a grip on what exactly LeClerc had in his Free French column is something of a shot in the dark with at least a pale moonlight.

So when it came time to decide what trucks to put into the book, I couldn't be sure of what to use, so I used a stop-gap measure and just referred to them all in very generic terms to allow players to fill in the gaps of my research. Since then, I've done some digging and here's what I've found:

Not all has been lost into the sands of time. There are some excellent sources about what LeClerc had with him at the Battle of Kufra (Feb-Mar 1941). For more information on that interesting battle, visit these excellent sites:

Battle of Kufra (Wikipedia) ...
Koufra: Beginning of an Epic Adventure ...

Anyway, the battle at Kufra provides us with an excellent starting point. Here's what wikipedia has to say about LeClerc's column in February 1941:


For now lets ignore the armored cars. They broke down on the journey and were abandoned for recovery later. So that leaves us with several types of trucks:

Matford V8 3-ton Truck
The Matford company was basically a French-based Ford company, licensed to produce Ford vehicles. The Matford V8 truck became quite popular and a general workhorse for French colonies abroad, and many found their way to Chad before the war began. However the majority of the Matfords used by LeClerc's forces were actually American Fords, shipped directly to Chad from the USA. These style of V8s were most common in the Free French column.
In the Sahara campaign the Matfords provided the serious muscle needed to shift an army across the wastes of the desert. Captain Barboten used 16 Matfords to transport his command (Groupe nomade de Ennedi) of 120 men to Kufra. They, along with a platoon from the 7th Company, made up the main assault on the Italian fort.

Fielding Matfords
In terms of Burning Empires, Matfords are the trucks would be transporting the Tiralleurs Senegalais Platoon on page 155.

Modelling Matfords
The Matford looks pretty close to the old raiding truck standby, the German Opel-Blitz 3-ton truck. For my French trucks I have gathered some Opel Blitz trucks from a few sources in the Flames Of War miniature line.

The first is Graebner's Reinforced trucks (see left, GE439 Reinforced Trucks). These are ideal for raiding trucks given their open bed and the fact that they are one-piece to match with my other raiding forces. Plus, they come with some great stowage pieces too.

The second source is the Opel-Blitz kit-set blister (GE430 Opel Blitz 3, 6-36S) which are ideal for modelling a cut-down Matford like the one below.

Bedford 15cwt trucks
These were by far the most common truck in LeClerc's column with 25 in total at Kufra. These trucks were much smaller than the Matfords and therefore used as a light fighting vehicle in the fashion of the LRDG's Chevorlet trucks.

LeClerc's HQ had a pair of them, but the rest were allocated to the 1st and 2nd Platoons of the newly formed Compagnie portee du RTST. These platoons provided LeClerc's column with security and forward reconnaissance. Like the LRDG they stripped their trucks down to the essentials and then loaded them up again with supplies, extra fuel, anti-aircraft cannon and machine-guns.

Fielding Bedfords
In Burning Empires, feel free to model your Tirailleurs Senegalais HQ with a pair of Bedfords. However, the bulk of your Bedfords will be found in the Decouverte de Combat on page 158.

Modelling Bedfords
Unfortunately, Battlefront does not have the Bedford truck in its range of trucks, but there are some quite reasonable approximations. The Bedford was a British 15cwt truck and it shares a lot of similarities with the Morris (BR430 Morris 15 cwt truck) and CMP (BR431 CMP 15 cwt truck) 15cwt trucks.

For my French I have used both. However, If I had to chose just one to use, I would go with the Morris (right) because its a lot closer to the Bedford's actual size and looks quite similar. The great thing about this kit is that you don't have to cut the top of the cab off. The canvas cover over the driving compartment attaches to the rear cover, and thus you can just take both of them away and you've got your truck. Plus the Morris doesn't have doors, which you'll note by the photos above, were usually removed from the Bedford.
Dodge and Chevorlet light trucks
These trucks were used in a utility role. Of all of LeClerc's trucks, these are the most obscure. All I can really do here is speculate. The Dodge might have looked like the 1936 Dodge pick-up, or possibly the WC13, though this seems unlikely. I plan to do some more digging here, but if you have some information concerning these trucks, please share!

Fielding Dodge and Chevorlet light trucks
These were used as command vehicles and so they would not be out of place as company or platoon command vehicles in a Compagnie de Tirailleurs Senegalais starting on page 154.

Modelling Dodge and Chevorlet light trucks
I wouldn't know where to begin modelling these! I'd probably recommend using the LRDG Ford V8 light trucks (BR444 LRDG Ford V8 Car). Otherwise, I would just use another Bedford or Matford. 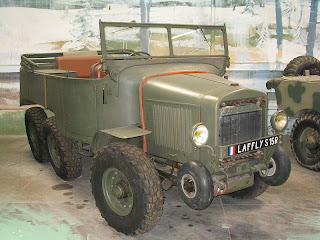 The Laffly S15 trucks were designed to haul guns and ammunition. They served LeClerc's pair of 75mm artillery pieces and their ammunition. The guns were mountian guns, and could therefore be stripped down and carried in the back of the truck rather than towing them.

Fielding Laffly S15 trucks
In Burning Empires you would find a pair of Laffly S15s in the Tirailleurs Artillery Platoon.

Modelling Laffly S15 trucks
The Laffly W15T truck is a cut-down version of the S15 and therefore quite appropriate as a stand-in for the S15. Unfortunately these models are not yet available in the Battlefront range. So, for now, you can just assume, as I have done, that the S15s have broken down and been replaced by some trusty Matfords!

Other Trucks
When Kufra fell to the French, they received a good number of captured Italian trucks to replenish their own dwindling numbers. They made use of AS37 trucks, Fiat 634N (3-tons), and even the heavy Lancia RO 6-ton truck. Adding a few of these to your forces as you see fit would be an excellent addition to your Colonne LeClerc!

Anyway, thats a not-so-quick run down on LeClerc's trucks. I hope you have found it useful!

In my next article I'll get a bit more specific about modelling and turning those normal-looking trucks into proper raiding trucks!

But before I leave you, have a look at this cool bit of video I found of LeClerc's trucks on the move in Chad! Video Link ...