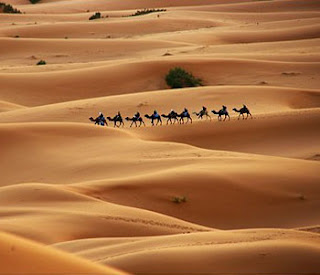 I'll be getting back to the Sahara this week with my Libyan troops. I figure all of the discussions about the raiders are incomplete without a look into the men that defended the Libyan outposts, so it's about time to have a look at the Italian garrisons of the Fezzan.

The Italian garrisons in the Sahara actually had very few Italian nationals. Most of the personnel were Arabic tribes who have called the Sahara home for nearly two millennium. Indeed a telling statistic from August 1940 that of the 3,632 of the soldiers in the Saharan garrisons only 1,101 were actually native Italians or colonists. The rest were native Libyans. So who are these Libyans?

When I was researching for Burning Empires, I quickly discovered that the story of the Saharan raiders began many years before the war. The modern element of the story kicks off at the beginning of the 20th century when the European powers were carving up Africa at breakneck speed (known as the Scramble for Africa). Libya was no exception. At the beginning of the century Libya was ruled by the Ottoman Empire. Following the Italo-Turkish War in 1912, Libya came under Italian control. The country was divided up into three administrative districts: Tripolitania, Cyrenaica, and the Fezzan.

The Riconquista della Libia
(The Reconquest of Libya)
Between 1912 and 1931 some native Libyans resisted the Italian occupation and colonization, chiefly a religious sect known as the Senussia. After several uprisings, the Italians undertook an amazing feat of logistics to finally crush the last Senussi stronghold of Kufra in 1931, completing the Riconquista. It was this campaign that taught the Italians about desert fighting, leading to the introduction of aircraft and truck-borne patrols (the early Autosahariane). The Senussi were all but eradicated from the deep Sahara and the survivors of the slaughter fled across the desert with no supplies to Egypt. The exodus nearly ended in complete disaster for the Senussi. However, Patrick Clayton (later of the LRDG) happened to be on a desert expedition, mapping the Egyptian-Libyan border and stumbled across the refugees and escorted them to safety. Between 1912-1943, somewhere between 250,000-300,000 native Libyans, mostly Senussi, would die trying to liberate their country from Italian rule. With southern Cyrenaica depopulated of its local tribes, the Italians garrisoned the region with other rivals.

An Interesting Diversion
I got a bit distracted learning about the nomads of the desert. If you could pick just one people that forms the iconic vision of the Saharan nomads, it is the Tuareg. In fact, they are so well known as desert people, that Frank Herbert used them as the template for his own Fremen in his Dune series (a personal favorite series).

The Taureg are a native people of the western end Sahara. Their people (nearly 1.2 million today) stretch from the western most borders of the Fezzan all the way into present-day Mali.
The Taureg are a fiercely independent people, even to this day. During the first half of the 20th century, they were mostly nomadic, operating several cross-Saharan caravan routes. In Libya, these routes were marked out by the Italians as 'roads', however they wouldn't be recognizable as such!

In Algreia, Niger and Mali, the Taureg resisted French control, giving rise to the Beau Geste mythology of the French Foreign Legion stories of the period. This opposition to the French made them natural Allies to the Italians, the 'enemy of my enemy' and all that. So when war came, the Taureg gladly assisted the Italians with their local knowledge with the trade routes to Chad.

Anyway, to tie all this into the topic at hand here's a fun little project I worked on for no reason other than a purely cosmetic addition to my desert table:

My Libyans for Flames Of War
This platoon has no business cutting in line ahead of my SDF project. However, I originally got these figures to see if they would work as SDF infantry. Turns out, they don't really, but I knew that they wouldn't go to waste, so I got them ready for my Mitraglieri.

The pack comes with a Solothurn Anti-tank rifle team, which isn't in the Sahariana arsenal as far as I can tell, but I painted it all the same in case I want to field a Poizione de Fucilieri from Hellfire & Back.

So here's the start of my Libyans! 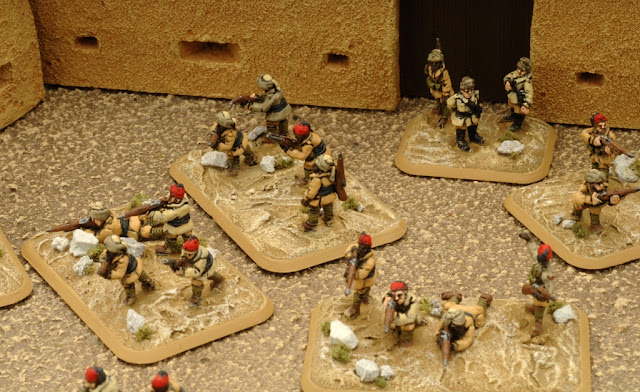 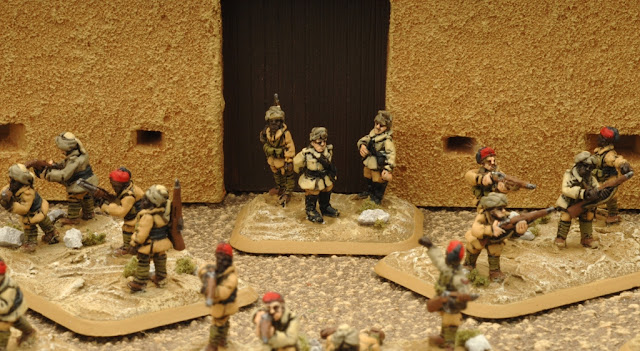 On Painting Sahariana Uniforms
The Sahariana uniforms were quite varied. Many wore the famous 'Sahariana' jackests, which I've painted a 50/50 mix of Khaki and Buff. The officers had brighter uniforms, so those have been highlighted with more buff than usual. Anyway, the sun does interesting things to fabric, so any shade between those two colors will be pretty accurate. For the remainder (about 50%) I used the usual Desert Yellow scheme suggested in the North Africa and Hellfire & Back books.

I also found this plate (naturally after I was done with the above!), which might help you pick good colors for your troops. I think the tunic is too white, but you can't really tell for certian from B&W photos. However, there are a few color photos in Andrea Molinari's Desert Raiders: Axis and Allied Special Forces 1940-43 (Osprey Publishing). The book contains some known errors int he text, but the photos are excellent. I also highly recommend Incident at Jebel Sherif by Kuno Gross, who has some of the best research and photos available on these events.