Project: Coronel and the Falklands 1914 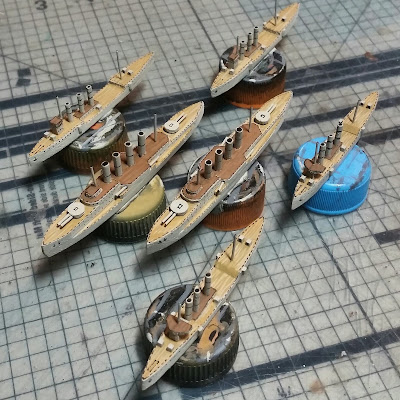 I got a little distracted during my Scratch-built Jutland project with the significantly more achievable build project based on the battles of the south Atlantic and Pacific in 1914. While Jutland had over 200 ships involved, the Battle of Coronel had 9 ships, and the Falklands had 13, six of which were also present at Coronel. So in total the goal to complete this project is 16 ships (not including a couple of auxiliaries that I might build later).

British ships at the Falklands included, HMS Invincible, Inflexible,  Carnarvon, Cornwall, Kent, Bristol, and Glasgow (which, along with Ortanto, were the only British survivors of Coronel) . The armed merchant cruiser HMS Macedonia was also present but did not participate in the battle. The German fleet consisted of the same ships as at Coronel.

Here's my WIP and progress on the ships of the German East Asian Squadron and the British squadrons.