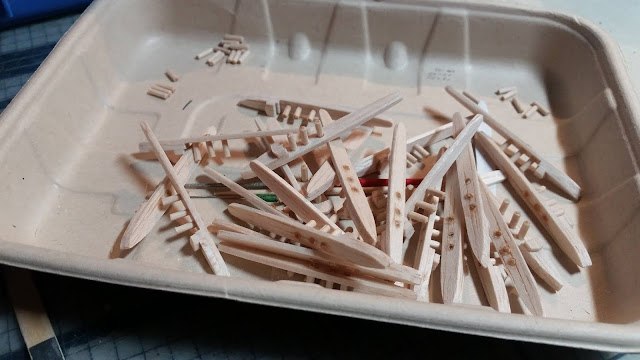 One of the more difficult things about my Jutland project was knowing that the "Destroyer Problem" was lurking just under the surface like a tethered mine...

And the complexity doesn't end with the sheer numbers, either. There was as huge demand for destroyers by both the German and British navies to cover convoy escort duty, anti-submarine work, establish screens, and for offensive fleet actions (massed torpedo attacks). To try and match demand, both nations' navies essentially put together their requirements for the destroyer class and then farmed out production to any shipyards not currently making capital ships or submarines. This led to a dizzying variety of destroyer types that all acted generally similar on the seas.

When I started this project I didn't know the full extent of the complexities, but I did now there were a lot of types on both ends. So what I did to start with was choose a champion variant that had the most produced destroyers for each navy and then just spammed 30 of each them. Once those are done, I'll go back and make a few variants to sprinkle into my destroyer flotillas.

So my plan was simple. Chose one model and go for it. For the British, this was the Admiralty M Class Destroyer and for the Germans was the V25 Torpedo Boat. The Admiralty M class destroyers were armed with four torpedoes and several deck guns, whereas the German torpedo boats emphasized, obviously, torpedoes with a full complement of 6 but only one or two deck guns. So first off I knew I was going to need a lot of torpedoes. I ended up using the same plasticard rods that I used for my capital ship guns (.020 diameter). Coincidentally, the 15" Gun template on my gun jig was also the right length, so I spent an evening mass producing torpedoes, funnels, hull pieces, and bridges. 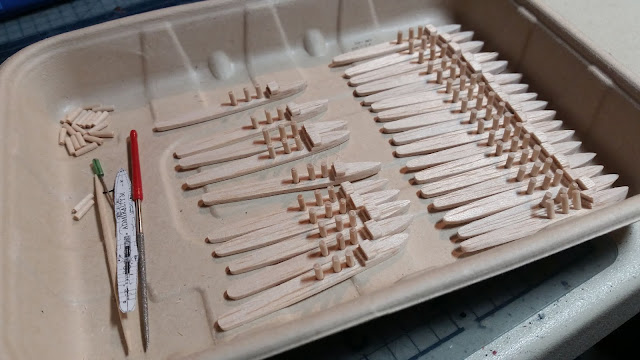 For the ship models themselves, I drastically reduced their detail to just the hull, funnels, and the bridge. This made it easier to produce a lot of them at once. The rest of the details I used my technical pens to reproduce, such as the deck guns.

Color-wise, the Germans seem to have painted the all-metal destroyers in dark grey, with anti-slip paint on the decks. The British had the usual medium Grey on the vertical surfaces, and a dark grey anti-slip color on the flat.

The destroyer elements for the battlecruiser fleets ended up taking about a week to muddle through, but once they are done, they fill out the fleets well. 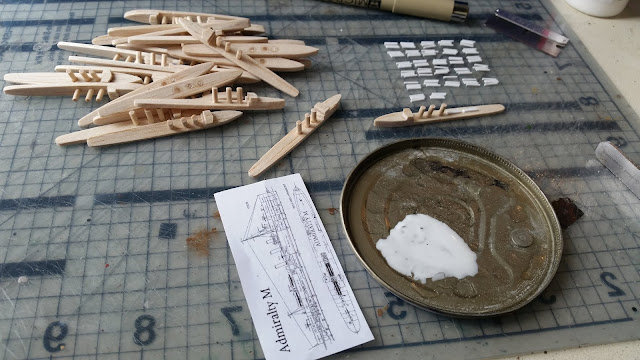 And that's it. The key lesson here is that it's easy to get bogged down in the details. So just remember that for a big project such as this, every bit of detail you add to your destroyers, you'll have to replicate a hundred more times. So just make sure that you find a balance that works for you!

Also, just a quick note, I've been reading Fighting the Great War at Sea: Strategy, Tactics and Technology by Norman Friedman, which has a bewildering amount of context around WWI destroyers, so if you're looking for more info, Friedman's book (well all of his books) are a really good start!
Labels: Jutland 1500 Scratch Building