MacLauchlanov - vs - Von Haught: An AAR 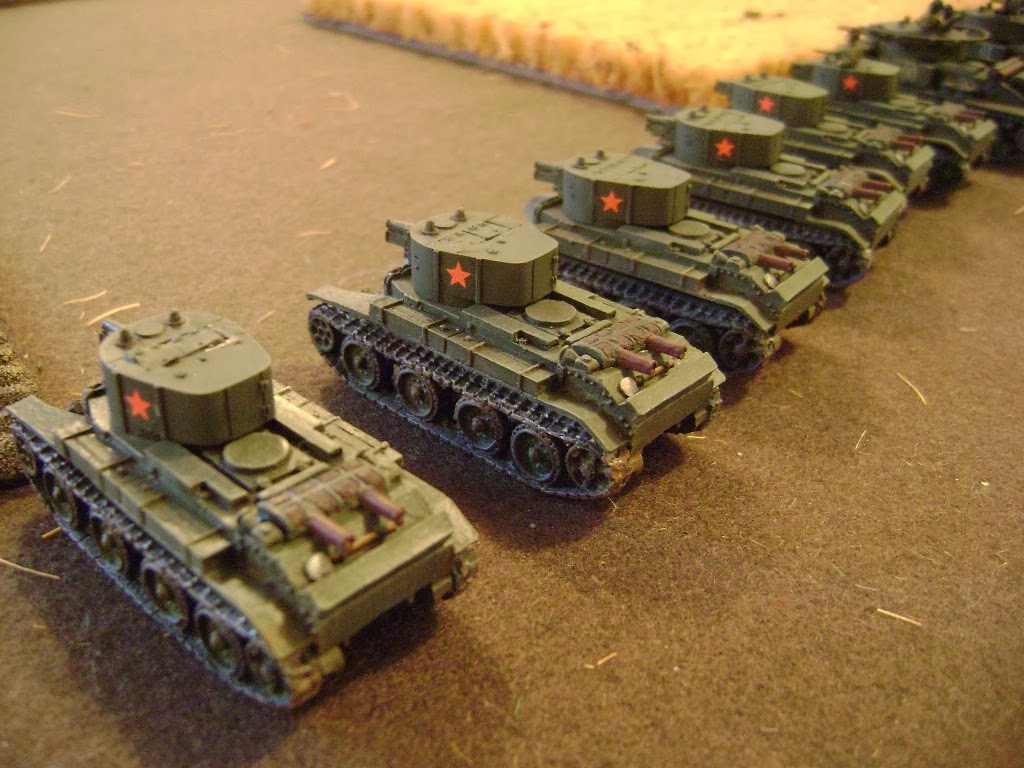 With all of the Late War excitement happening, Steve and I were feeling a bit old-school and decided to throw down an Early War game. Our theme was loosely defined as "A Barbarossa-ish tank battle" so I ran a Mittlere Panzerkompanie from Hellfire & Back (ironically running my winterized Panzers!) and Steve used a Heavy Tankovy Battalion from Rising Sun. The game was brutally fast, so I'll keep the report so as well!

Off the top of my head, Steve ran an HQ upgunned T-28, two T-28 companies (each with 4 upgunned tanks), a BT assault gun platoon with 6 tanks, and a full sapper company. His force was rated Confident Conscript. I ran two HQ Pz IVDs, a platoon of two Pz IVDs, a platoon of four Pz IIIGs, a Sd Kfz 221/222 patrol, and a 2/3 pioneer platoon. My force was rated Confident Veteran. 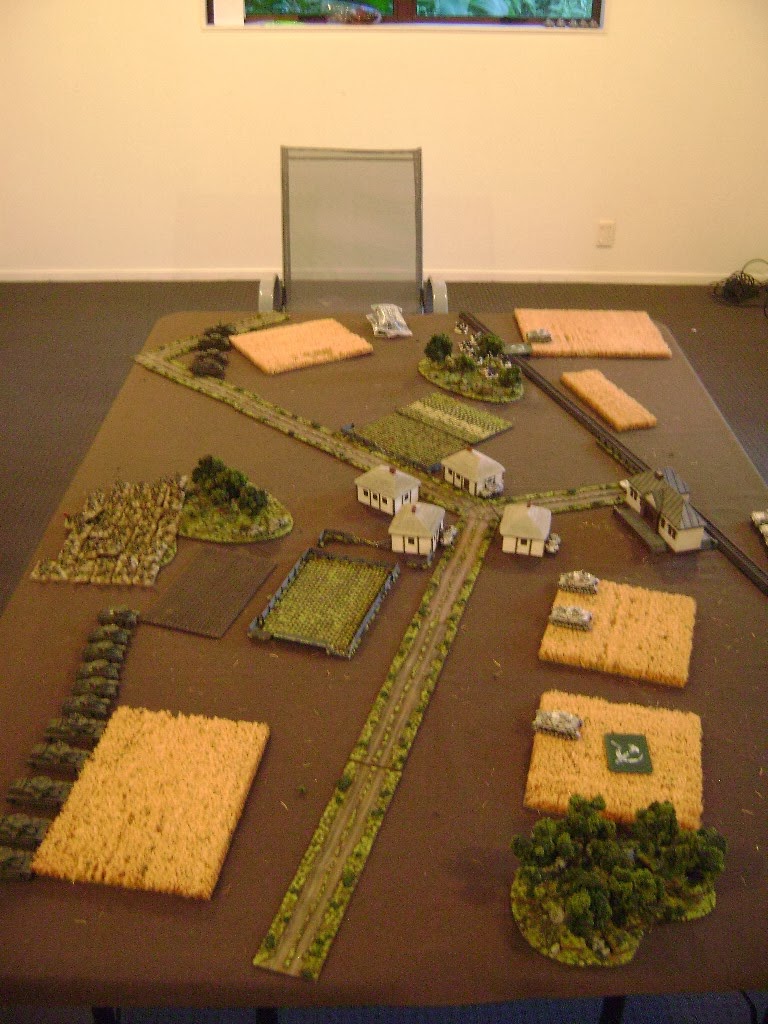 We rolled up Fighting Withdrawal and Steve's tankovy attacked using his Always Attack rule. I chose the side with some fields to give me concealment, and set up a gun line on the left, the pioneers and 2iC Pz IV on the right and the recon in the middle. The Panzer IIIs were in ambush. Steve lined up a platoon of T28s and assault guns opposite my Panzer IVs, the other T28s against my pioneers, and his assault engineers in the middle.

The game basically boiled down to two actions. On my left the T-28s missed my Panzers over a few turns, while my Panzer III ambush knocked them out in return. The 222s' 2cm guns claimed three (!) assault guns and the Pz IVs helped clean them out. Then the panzers concentrated all fire on the infantry for a few turns, reducing their numbers as they occupied the buildings in the center.

Meanwhile on the left, Steve's T28s assaulted my pioneers for four turns. With his combination of Top Armour 2 and a rear-firing MG, my Tank Assault 3 pioneers weren't going to do any actual damage, so I broke off and kept the objective hot. The 2iC helped some, but was really understaffed to deal with four heavy tanks. With the objective on the left secure, I sent my Panzers to the right as quickly as possible, and eventually destroyed the remainder of Steve's tanks. 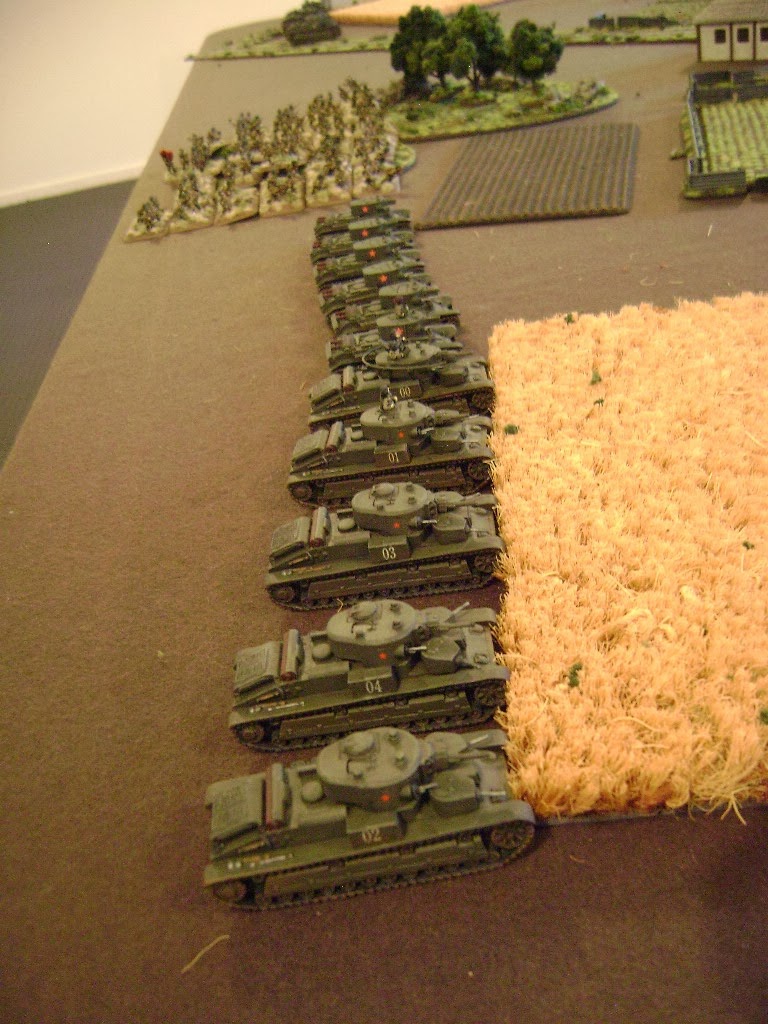 I honestly thought Steve had the game in the bag at the bottom of turn 2 when his T28s on my right started assaulting my pioneers, but the concentrated firepower of the Panzers wiped out the right flank opposition in a flash. From there it was a matter of time. Talking with Steve afterward, we agreed that he was on the back foot from the word go as Soviet heavy tanks are great at killing infantry, but struggle against German Panzers. I also think that the mission and table favored me a bit by letting me deploy all of my force in cover and keep them there for the duration of the battle. So, I don't think I really did much to win this game, and in fact may have under-powered my right flank too much. If Steve had a shot it would have been on that flank, but the concentrated fire from my Panzers proved too hard a pill for the Conscript Soviets to swallow.

My take-away from this game: Early War Panzer IIIs and IVs aren't as crap as I thought they were!

Anyway, short and sweet! Thanks for stopping by.