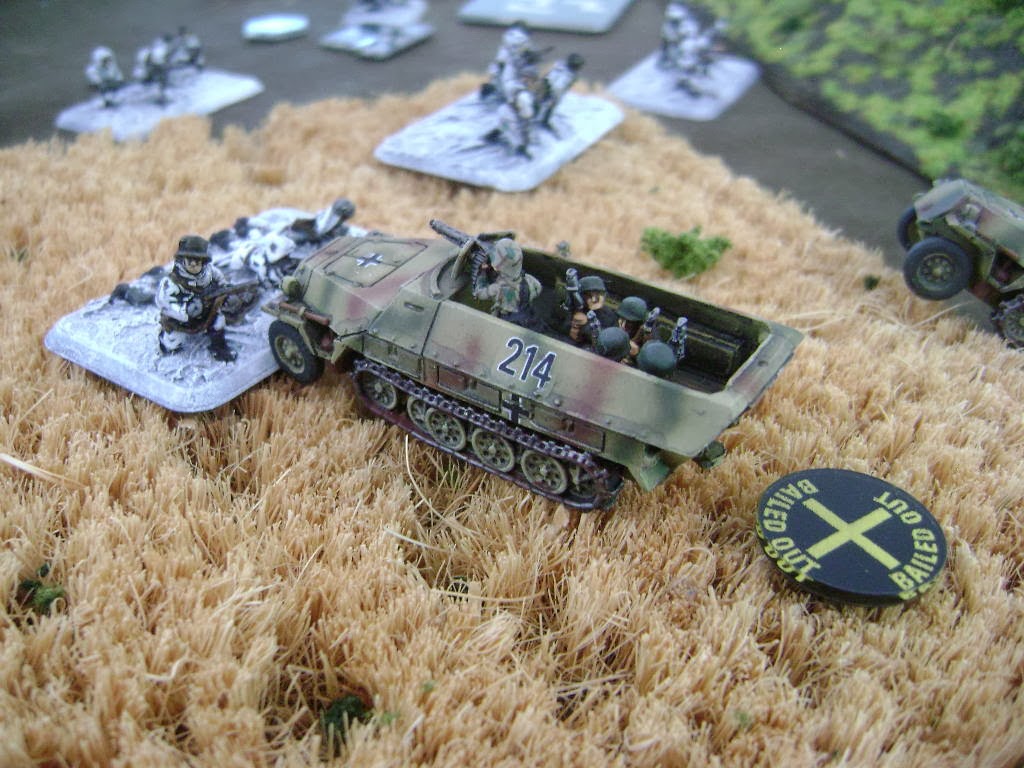 Last week I got to play a game with my brother. He wanted to test out his army list for the forthcoming Flames Of War tournament at the BattleCry 2014 event. It's a 1575 Late-war event, and he is bringing his Finnish army. Unfortunately BattleCry interferes with my family schedule, so I can't attend the event this year. However, if you are in Auckland on 15/16 February, you should drop in and check it out. It's a great event with lots on for gamers young and old!

I haven't asked if Andrew is OK with releasing his list specifics, so with that in mind all I'll say is that he's rock'n a Finnish infantry company with lots of excellent PaK40s, artillery, and some looted tanks for a total of 9 or 10 platoons.

I left deciding what to take against him to fate and designed three 1575-point German lists (I'm on a panzer kick these days). On the day I rolled up a D3 and ended up with this list:


I gotta say I love playing Panzer Brigades. Every time a 1500-ish point event or game comes up, my thoughts instantly drift toward their Reluctant Trained goodness. They are so challenging and get some intense amount of firepower for dirt cheap. They aren't for everyone, but this guy loves 'em.

The mission was rolled up randomly as Hold the Line, so I knew this was going to be a particularly tough game for my RT troops. Still, Andrew's troops had to hold out for several turns against a focused attack. I felt I had a chance, albeit a narrow one!


I assaulted the small Finnish platoon with my Panzer IV/70s, hoping to knock them out before they could reach the objective they had wandered too far away from. However, I ended up getting swamped and losing an assault gun as a result, while the other broke off. Andrew's infantry moved forward to deliver a follow-up assault on his turn, but this proved unnecessary as the sole remaining Reluctant PzIV/70 failed its morale and ran away.

I was now in control of the objective and there was no way Andrew could get his troops to the objective in time. Victory was so close! Well, as it happened the small platoon that I had pulled away from the objective was in a good position to knock out my Möbelwagens, which he did handily, knocking me to under strength. With no CiC or 2iC to take my morale test, my company breaks!

An intense game that was so nearly mine, but I played my warrior teams haplessly and lost me the game. I rolled a die to see if I could have passed a Reluctant Morale Check, I rolled a six! I could'a been a contender!  What was nearly a 4-3 German victory became a 1-6 loss to Andrew's expertly handled Finns. Well played!

It was an excellent and action-packed game! Thanks to Andrew for hosting the game. I wish your Finns all the best of luck at BattleCry!