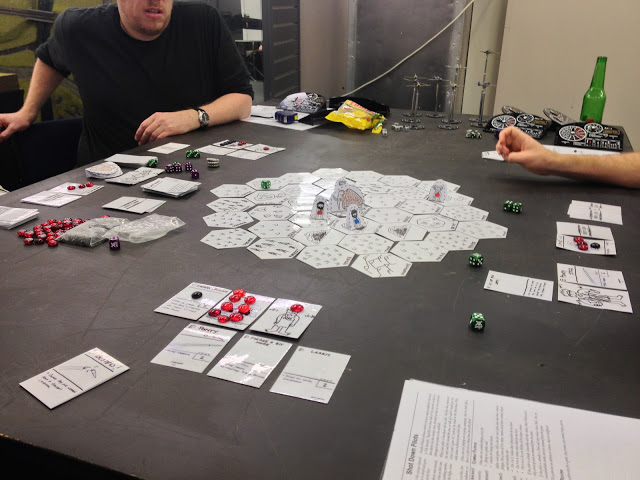 Sean and I have dubbed 2013 the Year of the Caveman. As many of you know, Caveman vs. Mammoth has been something of a fun project over the last few years, and its really grown and evolved (no pun intended). We've got plans to turn all of our hard work into something special. So what does this mean for Caveman vs Mammoth? Well, I'll tell you! 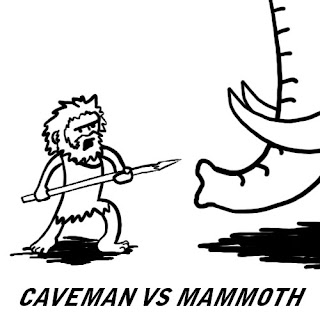 Origins
Originally we envisioned Caveman vs Mammoth as a miniatures game. The goal was to generate an open source game that would just be a silly little game to play, perhaps between rounds of another game's tournament or something similar. After a bit of thinking, Sean and I both felt that the game was plucky, but not very conducive to the miniature game environment. "Funny" miniature wargames are inherently narrow systems. Once the humor and jokes become old, the game loses a critical component. Miniatures gamers like depth, even in simple games, otherwise there is no replay value, and therefore no reason to expand their collection. So, CvM, as a miniatures game, was flawed from the start, it was never meant to be taken seriously, which means that the public likely wouldn't take it seriously either. 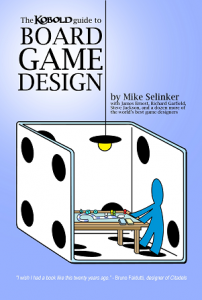 Transitioning into a Board Game
At about the same time, I've been thinking a lot about board games. Earlier in the year I had purchased and read Kobold Guide to Board Game Design (Amazon Link). That book is an amazing read if you have any interest in the game design field at all. After taking aboard the lessons learned from that book and a few others, I decided to venture in to board game design.

I had a list of about six games which are in various states of development, but I got to thinking that perhaps CvM would make for a good board game. It occurred to me that a board game version would have a wider audience, is self-contained, and could allow us to widen our game mechanics and thus deepen gameplay. In the end I think it will be a much stronger product than a miniatures game.

The new and improved board game version has been in playtesting for about 6 months. Sean and I played several games, getting the basics up and running before widening our test group to our workmates. We're getting there, but this year Sean and I are going to try and make a push to get the game completed. 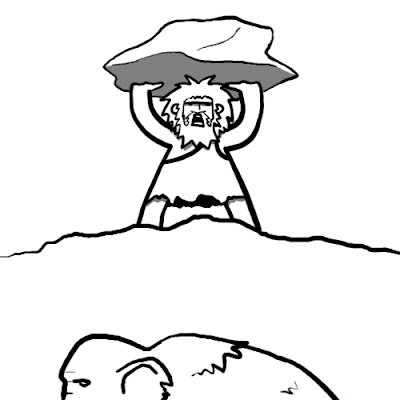 The Board Game
The game is driven by a hex-based map. Each hex has a different terrain type, prairie, caves, tar pits, etc. These all have an impact on players' cavemen and the mammoth. The table will change with each game, so there is no guarantee that the strategy you had going for one game will work for the next.

The transition to a board game also makes it a lot easier to move and control the mammoths in a fair and balanced manner. There's a deck for the environment and each turn, the mammoths will do what the environment cards tell it to do (unless its under attack, in which case it will fight back). So no particular player controls the mammoth, it does as it wants.

Each player plays a caveman, and there are several ways to win, such as straight-up meat collecting, empire building, and more. You can build an impressive cave with all of the bells and whistles, or you can live in a wet stinky hole, guarding your massive pile of meat. Its up to you how you will win. Victory cards will help enhance your points and give you goals to build toward winning the game.

Evolution and Interrupt cards (names pending) give players the chance to enhance their tribe or hinder their opponents. These include some technological advances, such as pointy sticks, to calamities such as Infections and more.

So as you can see there is already a lot more depth than there was before. Sean and I are really getting excited about this game, and we can hardly wait until we can finish it! True to form, we've already got some expansions lined up in our minds! 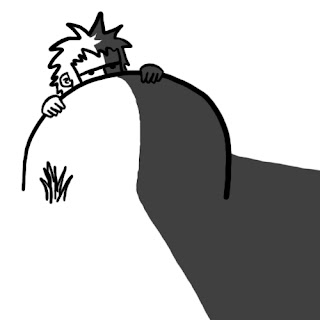 What does this mean for the old CvM material?
Simply put, nothing. To be honest it was yesterday's idea. We won't be developing it any further, and I've taken down the PDF downloads from SBS to prevent any confusion with our new direction. As I mentioned above, its not really a great game and we stand by our decision to turn it into a board game. We hope you are as excited as we are and I'll keep you all posted about the development process as we press on into the Year of the Caveman.

Thanks for all of your support!

Labels: Board Games Caveman vs Mammoth